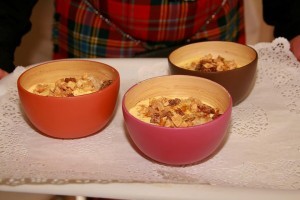 Make porridge with a mix of milk and water, adding apple powder, cinnamon powder, chopped dried apple, chopped dates and some chopped apricots. Simmer for as long as necessary.
When thick and creamy pour into a bowl, sprinkle on some coconut flower sugar, and enjoy with some raw Guernsey cream (on the side).